So Far in the West 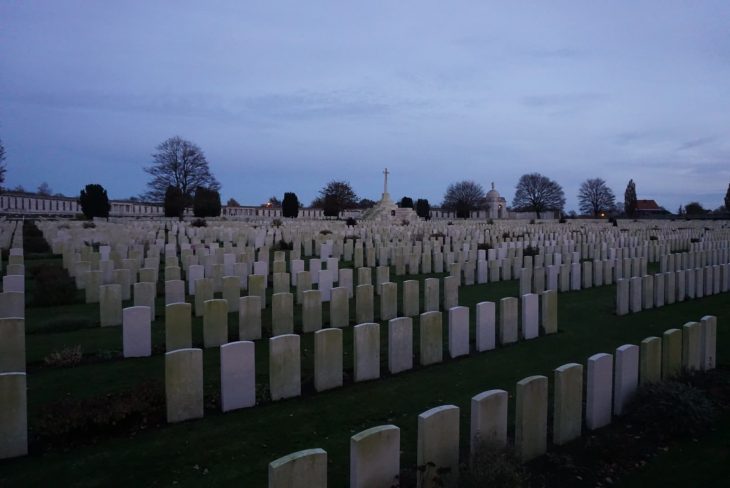 Horizontal lines, with verticals of trees, church and belfry towers, cold wind. Coffee only to take away. Water everywhere, marshes, wet fields. The Pool of silence where a party spread blankets, sipping rosé while a labrador is patiently waiting. Observing them feels like being a part of a ritual. British military cemetery and two graves of German soldiers stand out of the rows. An old lady with her son, they seem a bit perplexed, as if waiting for somebody who has not come, or not knowing where to go after the cemetery walk. Wait, I start counting – the lady must have been born in the 30s, so her dad, her grandpa probably fought in this war. The huge conflict of nobody knows what reason. A few meters of mudded Flemish land? Unlike the WW2 with the enemy so clear and the objective so noble, in the WW1 the millions died or came out wounded and damaged for good and no textbook can explain clearly why. The Great War slaughter because of a huge mental lockdown.

Belgium is a master peace of monuments, they really have the skill of making them sober and touching, without any too-much-ness. Unlike Slovakia, where the Great War is a great confusion: we fought for the Keiser and his empire we did not consider our empire. This war´s end meant beginning of a new chapter called Czechoslovakia that we are also kind of unsure about.

Names are read, not aloud, more whispered. Names and ages of men who died; their stories ended, but also continue. The old lady and her 60year old son get into the car, dusk is setting over Flemish fields, in the west, the sky is still lily-rose, the shade of thin autumn air. The crimson of roses planted among the white graves. I have always been touched by late-autumn roses. Brave, keeping on blossoming.

Alex loves this trip; first time we came he was a tiny boy. Later, he came with his school and cycled around the monuments. He remembers sandwiches and lemonades served in the monument park. We both love Peaky Blinders.

We drive back to Brussels, though I like the town of Ypres so much, especially around this time, when Armistice anticipates advent, the lights are everywhere. Museums, restaurants and most of the shops are closed for another lock-down. Open-air museums are open, but the site of German trenches is closed to-day because of hunting parade going on in the area. Mass agriculture shaping the countryside, so close to France, so close to the sea, so far in the West.

„This man is like a forest. He believes to be dark, and he is touched by the rays of sun everywhere.“ (Free translation from French of a quote that has arrived to my heart these days. The author is Henri Gougaud).

Dedicated to men. To the men.