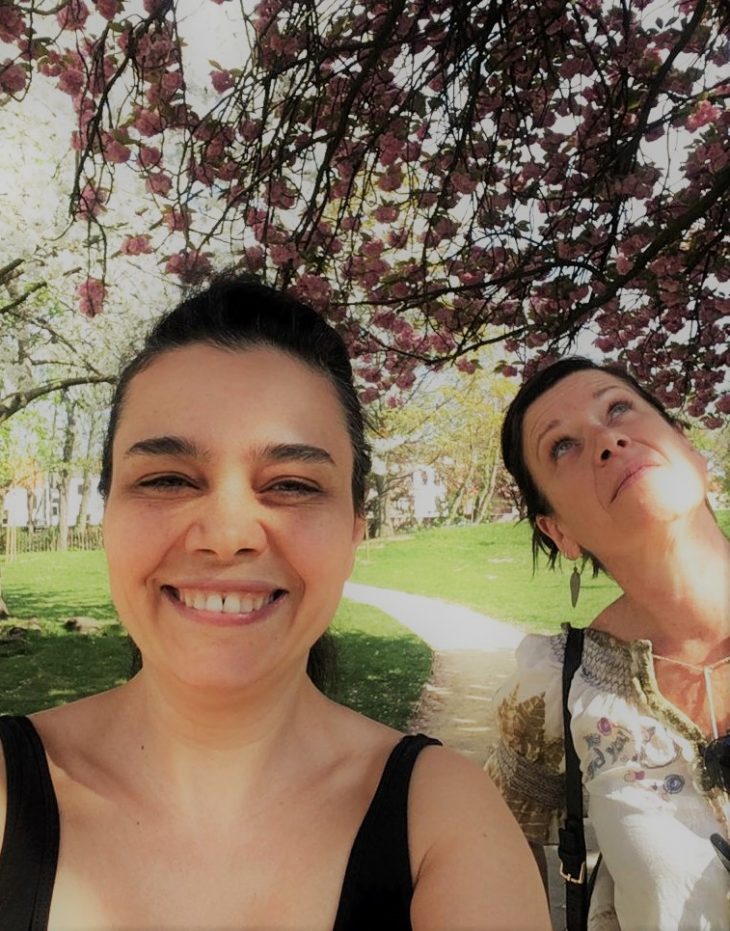 With Lianna in a park in Ixelles

Finally, low grey sky, first comforting drops of rain on the roof, the unmistakable smell of water in the air. It is a fine rain, the one that almost leaves no traces on windows. I am very suspicious towards people who do not like rain, but among them are also a few dear beings, so I accept we just have different relations with the elements.

Brussels is a slow-motion town – if something new comes along, first observe it from the distance, see if it is worth to assimilate, to integrate. Confinement rules came rather late, and it looks they will stay longer, because also the momentum is slow. Such as lunches are normally long, accompanied by lengthy discussions with waiters, watered with wine and finished with coffee. Okay, nowadays, plastic containers with home prepared lunches are reality. Alongside, young lads on scooters and bikes deliver food around the town. So much is concentrated on the basic supplies and needs. Survival mode in a post-modern version. Hunting in supermarkets, practicing patience in queues.

A swell moment to listen to the inner voice calling us home.

“When a parent denied your reality, was the first time when you learned not to trust yourself.”

“The most misunderstood addiction is the addiction to chaos, stress, emotional abandonment.”

These are two quotes from the @the.holistic.psychologist on Instagram. I googled who is behind – Nicole Le Pera, a U.S. therapist forging new approaches to mental health. World wisdom traditions say:

Pain, physical or emotional, asks for attention, awareness. It is a torch on the path of healing.

These suddenly insecure times (as if anything were ever secure or stable in the world of forms) bring out hidden traumas: childhood ones, transgenerational ones.

Each era has its own challenges; I would say we are here and now to heal the splits, to become whole, to move from survival mode into… Well, the thrill part is the unknown part. The best part is that each of us can find his/her own way.

In the past weeks of April, we have not confined so much – I met a friend here and there for a walk. The beauty of cherry trees in blossom is almost eerie. During the walks, but also in chats and telephone conversations, in blogs and quotes shared – the same topic slips to the foreground, bubbles up into the surface: pain. The need and the possibility to heal.  The inspirations exchanged, links forwarded to interesting interviews, articles, blogs.

In an interview Boris Cyrulnik promoting his book La Nuit, j´écrirai le soleil” talks about the possibility to transform a trauma through story writing. The scientists and storytellers have much more in common than one would say, says Boris with a broad smile. Listening to him is like a glass of fresh water in a scorching heat.

Another friend has brought Guy Corneau back to me. I remember the book he published after he healed himself from a cancer years ago. He was a kind of a celeb among Francophone inspiration teachers. His talks are mostly on love in its different forms. A charismatic man, an honest man talking openly about complicated world of intimacy. He died rather young in 2017.

Here, the rain has gotten stronger. I know already what I will miss from this era: less hours at work making my mind fresher, more ready to work, with more open attitude to time and routines. I will miss the silence in the town in which gentle fridge humming is a soothing sound. The neighbour coming out with a bell every night at 8 to eagerly ring it around, making eye-contact and sending his smile to the Etterbeek air.

Certain new rituals I am willing to take with: more home-prepared lunches, online yoga classes as the miracle of yoga matches technology quite well; the vibrations travel and we are joint in practice being physically in different places. Now, Monday 6 pm, there is often Brussels, Bratislava, London, Prague together in a sequence.

Nothing is ever done. The streets of Brussels are rather dirty, despite the effort of the garbage men, my favourite bunch, I have to say. One-use mouth masks littered, scattered on pavements. Why?

Next “event” might be a natural disaster moving us deeper into survival mode, to a real one, when food is scarcity, not only changed hours and longer queues in supermarkets. Us, or the generation next. Good to bear it in mind. Still, I am willing to nurture and spread trust in Intelligence, in Learning, in Loving.

For the French speakers, on love in a couple and Guy´s Canadian French so sparkling: https://mail.google.com/mail/u/0/?tab=rm&ogbl#search/bwayembergh%40gmail.com/FMfcgxwHMPnddVCtvRLJZJRSxDvDxzMN?projector=1