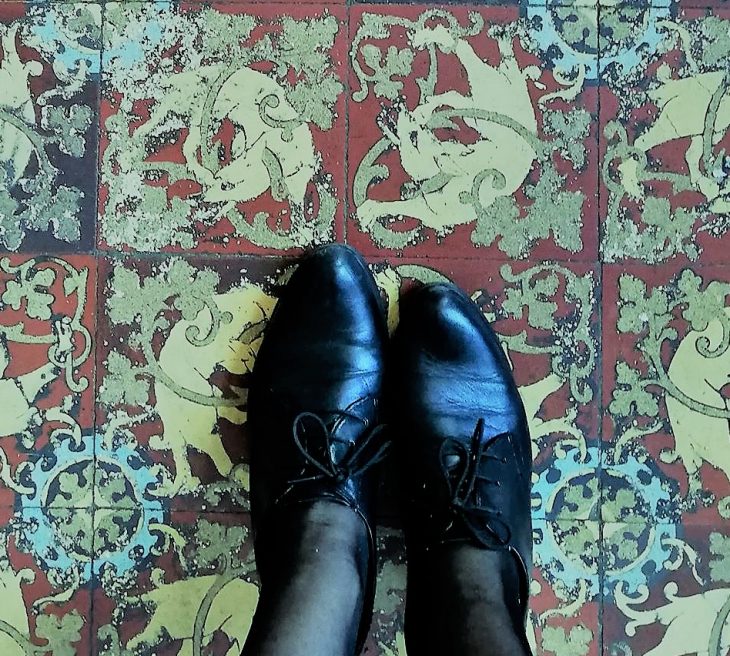 (The café has the most original tiles. The photo was taken earlier this year, before the sandals´ season)

I am sitting in a coffee place one early summer morning, looking at the front part of my bicycle standing outside in the fresh sunny air. More and more I love this Dutch bicycle bought second-hand in a store in Rotterdam run by a guy called Malik.

On our way where? I am scanning the brain with an apprehension and a sense of guilt that my ex reliably extrudes from me at any time.

“On your way to school, you and Alex.” He repeats.

And there goes what I considered as a rather cool morning with an easy day in the office ahead. Thinking furiously how to make up for the situation I get a text message: Thanks, I felt like an idiot here. More sense of guilt and shame, as if he had a button which goes directly to the storage of I-am- not-good-enough emotion. I am in this shit with Alex now, who is asleep at home and does not think a wink about missing a school meeting that he initiated. School year finished, he wanted to talk to his principal teachers about some stuff.

Finally, with attention and intention things can be fixed, even  smoothly. I call the teacher and Alex, both agree to meet later in the morning, I tell my colleagues I will be out for a few hours, with a mobile phone if anything. It is July and the office in the beginning of holiday mood. Things must be done, but at a leisure pace. And what started by the phone call rounds into a rich experience. What cannot be fixed, are the buttons we touch in each other with my ex. I surely hit the one opening anger and irritation in him, he hits the famous shame/guilt/defense one in me.

Anyway, there is this plant in a big pot I have at home, a plant he once got from a colleague. It almost died out years ago during summer being over-watered by an eager plant-sitter. I saved it, and it is doing fine. It looked a bit sad this spring, communicating non-happiness to me. I ask, caress its leaves, give it a shower, shift it a bit, to not much avail. Until, it comes as a flash information: too much light here for you; you are a shy plant, do not need direct light. I take the heavy pot and bring it upstairs to the shower alcove, where there is just one little window and semi-dark all the time. I give the plant a shower and put it on the tiles. When I come to check a few hours later, the leaves are upright, the tight white but of a flower firm and glowing in the dim light.

Now, you are much better here? I have the habit of talking to myself and plants and cats and cars and stones. Too much light is too much for me, too.

Back to the initial subject. Why could  we not help each other to the happiness with my ex? Because human relationships are much more selfish. We want something from the other, so, even giving, we are in an expecting mode. And what do I want there from the other that I cannot find in myself?

Homo sapiens is the early stage of evolution, I guess. At some point, a much lighter creature will appear (I imagine them to be close to the Elves in Tolkien´s saga). These guys might look at archaeological relics of our age as we look at mammoths: clumsy, heavy, with little more than survival instincts.

We are mind mammoths.

Still, each day, bringing consciousness into the presence, we may get a tiny bit lighter.

Do not make others responsible for how you feel, my dear.

Yeah, thanks for the reminder. I cannot change anything. My ex will hit that shame button until there is no more shame in me and then he won´t. Until then, thanks for reminding me and have a swell present moment.

Just as for the plant, I search for a place for myself where I can flourish. Also learning to flourish where I am.