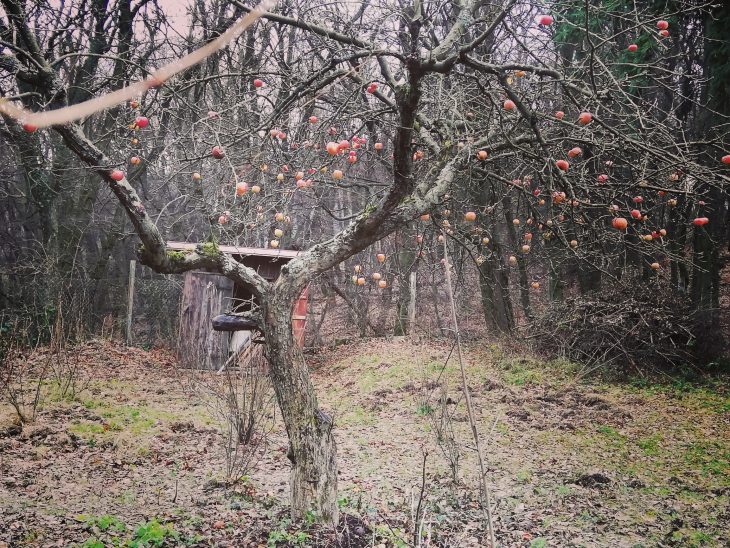 In a valley of a forest that can be considered deep upon Belgian standards, deep enough to enable hearing more silence than highways, I meet two guys taking water from a natural spring. I hear them speaking an unknown language so I ask them where they come from: Chechnya. An old and a young man. They have been in Belgium for twenty years; for twenty years they take water from this forest spring. They say their language is ancient, the one Noah spoke. Which Noah? The Biblical Noah? Yes, himself. The older man talks about their origins in a mixture of French, Dutch and English. I take out my rusty Russian. Four languages packed in a five minute conversation. They laugh: The water is good, though the sign says in three languages and in a picture that it is no drinking water. Brussels tap water is hard, metallic, a kettle one fills with it is soon covered with white crust. Hair freshly washed with it feels like starched. So who says which water is good? I understand them – and I am also ready to try out unknown berries in a botanical garden and drink from wells I do not know – also capable of having a serious panic attact afterwards, thinking it might have been poisonous.

We part and I cross the woods getting into a natural water resource where people fill bottles legally. Zoet Water near Leuven.

A few days later I walk the forest in my hometown, the well-known paths bringing memories of people and situations. Birds among barren old trees, ground trodden by boars is deeply raked. Two girls with a little terrier are the only humans I meet on a pre-Christmas ordinary day. The tiny dog is carrying a log three times bigger then itself with the air of pride and content. Does he always do that? Yes, and it is a she. Of course, a she. The lady dog disappears with its proud catch before I have time to take a picture.
The topic of sanity on my mind these days a lot. We spent a few hours with an officially claimed crazy lady who presented herself at the Embassy one December afternoon. The same week another guy with psychic disturbances showed up. Like with Chechen guys, I am seeking similarity more than differences when communicating. The lady clearly had no shields in communication, she was banging doors with a great gusto, she was yelling at us accusing us of craziness. She refused to talk to her psychiatrist because… He is crazy! Medical staff from her work, her husband and two police officers tried to get hold of her and bring her to a hospital. In vain, she managed to escape. There are surely stories woven around her soul and heart that have brought her to this state. Such as there are stories woven around the heart and soul of a guy who claimed to have contacts with spirits and felt in danger.

Who is crazy here? We live relatively long in these bodies and what do we do? Some distraction, some pretending, some numbing, some escape mechanisms to protect us from… From what? From whom?
Why do we not – like the little terrier – carry a huge log while walking proudly on short legs? Oblivious towards the past, not giving a dam about the future? Well, we do. For brief moments.
Vikings would not have much patience with the crazy individuals among themselves. No, no, guys, if you are not warriors or not otherwise useful for the tribe, there you go – slain and sent to Walhala. Humans have done quite a stretch since ancient tribal times, trippled life span (not full health span, though), forgot the ancient wisdom and traded spiritiuality for science. Science without spirituality is lame, dogmatic and rigid. Using science as one of zillion keys opening endless doors to mystery is a great expression of creative force.

Dropping judgment. The borders between sanity and insanity are fuzzy and moving. The present moment always contains all: The mystery. The sacredness. The stillness. And Christmas has the magical power to bring all this around. When I allow it.

To make a prairie it takes a clover

One clover, and a bee,

The revery alone will do

If bees are few.

Emily Dickinson. On a table in front of a house at the edge of a forest near Leuven.

Freedom granted to all: To find out what revery is and what endless forms it takes.