Tibet in Belgium. Yoga Weekend at the Tibetans 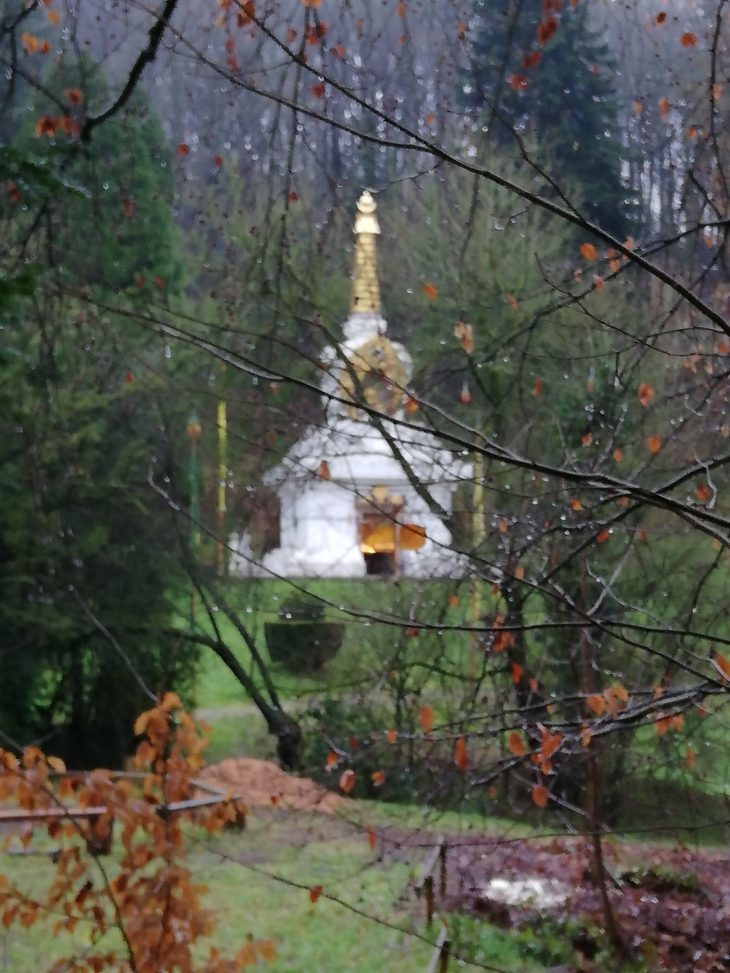 The first days of 2019 are rainy; no heavy rain, there is just an ongoing drizzle and trickle, the water condenses on the bare branches of trees, it fills the porous earth, it pulls the sky down, and shapes the fog. The roofs and sculptures of bright tropical colours – golden, green, red, peacock blue and bright green – shine through. It is The Tibetan Buddhist centre close to the town of Huy and to the nuclear power plant of Tihange. One can get very close to its cooling towers, though there is a double barbered wire. The towers seem to have undergone a reconstruction, a few years ago they looked like plastered with an office tape. Vapours swirl around their tops and mingle with the moist air. In the region, there are several castles and manor houses, once I was here in a viniyoga training. It feels a long ago, a different era, a different me.

The Buddhists own the castle, it is a typical brick construction with an inner patio, the original decoration contrasts with the Tibetan ones; there is a symbiosis with yoga, though I suspect the monks do not care about the yoga so much. Yoga brings visitors and visitors help to ensure the monastery maintenance. Why not?

My ego is in a strong opposition with everything institutional, though. I feel like banging into large gongs and letting them produce a loud benggggg. It is probably not allowed so I refrain myself. Perhaps it is the strict rules I so do not like about institutions. We attend an evening meditation in a great temple, the gongs are used moderately, mostly, there is  silence in which an ego is supposed to dissolve. Again, I feel like banging the gong, let its sound to lift me. Instead,  I shift, scratch, turn and do all the parasite moves which my mind uses in order to keep its power.

Yoga practice is a meditation in move, it fits me better than motionless sitting. After rounds of sun salutations the head switches off spontaneously. Three hours of practice a day in the spacious temple and then whatever: vegetarian food at shared tables, a walk through the forest in Wellington boots, an early night and an early morning meditation.

Abram studied the house rules, and there are quite some, whenever I hear or read about one, I have a strong urge to break it. I do not, but the urge is there. Yoga is a discipline of observation, so I just look at it from the observation point.

A deep respect for people who have opted for a path of withdrawal from desires, for conscious seeking of something beyond mind. It requires courage. A few Belgium guys perform the chores around the kitchen, they are striving to live as monks. A gazebo on a little hill is the only place where they can smoke, voices are constantly heard from there, it is a little island of revolt. Lama is humming mantras during lunch; chickpeas, carrots and rice in a tight embrace.

The yoga teacher is Sebastien and the present moment. The classes are constructed to introduce shivananda yoga; sun salutations as a warm-up, followed by a head stand, upside-down positions and counter-positions and much more. Sebastien is enthusiastic and joyful, he inspires, and the sequence works fine, the breath of life is there. It is swell to be guided.

The price of the yoga weekend is fully given to the Centre.

Sunday afternoon the dusk comes early, sped by dark clouds. In the Tibetan library peace prevails,  I see a few writer-teachers, touch their backs with a finger and eyes, for a moment, I nap on a comfortable leather couch.

We put the mats into the car, after a couple of hundred of meters the cooling towers are in sight again.

And I almost forgot important castle inhabitants, there is a couple of a black and a white swans swimming in the pond. They are accompanied by a white duck, perhaps the swans adopted it, like in a fairy tale.